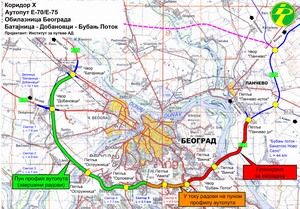 By construction of the Belgrade Bypass the branch of the Corridor Xb, E-75 (border with Hungry,  Horgoš- Novi Sad-Belgrade) will be connected to the Corridor X, E-70 (Border with Croatia Batrovci-Belgrade), I B Category state road No. 26 and Route 4, E-763 (Belgrade-Požega-border with Monte Negro Boljare), and again to the segment of the Corridor  X, E-75 (Belgrade - Niš – Preševo – Border with Republic of North Macedonia). Positive effects of the construction of the Belgrade Bypass will be felt when vehicles are diverted from highly frequented core urban road networks of Belgrade to the Belgrade Bypass, which will contribute to the utterly improved influence on traffic flow on the Bypass, and at the same time on traffic flow on the core network of urban roads under the most intensive traffic.

The effects of the abovementioned improvements will reflect on:

Traffic flows using the Bypass instead of segments of the core network of urban roads under the most intensive traffic, especially transit flows, would receive “services of the 5 star hotel in place of ‘no star’ hotel”.

Bypass route has been designed within the corridor specified by the Belgrade Master Plan as the one to be used for passage of roads through Belgrade City area. Due to such circumstance, mutual spatial and functional ratio between the motorway and the city has been very carefully studied and the section has been designed accordingly to satisfy all the criteria of an international motorway, simultaneously representing a positive factor in the development of the city.

Section A: Batajnica-Dobanovci – works on the route and on Dobanovci and Batajnica interchange are completed.

It consists of 6 sectors, as follows:

Section C: Bubanj potok - Pančevo (E-70) – upcoming works
During the 1980s, a special Feasibility Study was prepared for the motorway section Dobanovci-Bubanj potok. This Study analyzed all the alternatives and examined all the economic parameters, concluding that this represented a priority as well as a profitable investment in Serbia’s road network.

TECHNICAL CHARACTERISTICS OF THE SECTION:

Total length of the Bypass section from Dobanovci to Bubanj Potok is 47.4 km and it was designed with design speed of 120 km/h.

The road profile consists of:

Five nods are designed on this section: two of the being at section ends and three in the middle part of the section.
Solutions for layout and elevation of the basic alignment are specified in such a manner that the construction of other interchanges will also be possible in the future, provided that justified traffic reasons substantiate such an action.

There are 41 bridge localities with 79 structures on the section Dobanovci - Bubanj potok.
The biggest bridge is the one over the Sava River near Ostružnica, consisting of three structures in total length of 1,965 m (steel structures over the river and approach concrete frameworks on both banks).
All other bridges are concrete, whereas five bridges are distinguished by size: “Sveta Petka“ (408 m), “Železnička reka“ (406 m), “Kijevski potok“ (571 m), “Topčiderska dolina“ (597 m) and “Bridge over the railway line”, 430 m).

Four tunnels are designed on this route and those are the following: “Lipak” (partially under the plateau of the railway station Ostružnica, length 665 m), “Železnik” (699 m) and “Beli potok” (under Avala road, 360 m) with two tunnel tubes, and the “Straževica” Tunnel (under Resnik, 745 m) with two separate tubes.

The project is being realized in two phases, with regard to the content of the cross-section. The first phase is based on construction of one carriageway of 11.5 m and its functional use for two-way traffic. However, it contains all the elements of the final solution that will enable simple upgrade to full motorway profile. Additionally, this phase includes expropriation of road area for the final solution. The second phase (now in progress) comprises the completion of all the remaining works in accordance with the final Design.